Shoesmyway . Style Icons . The many faces of Pierfrancesco Favino

The face of Pierfrancesco Favino, one of Italy’s most eminent present-day actors, is a face that tells a story of talent and ambition.

An artistic journey that is rich in successes, his is one that has already won him numerous “best actor” accolades, including three David di Donatello and five Nastri d’Argento awards.

His mastery resides in his chameleon-like yet authentic character portrayals. During his career spanning almost twenty years, we have followed him in the stories of characters who he has interpreted with the utmost care and sensitivity, stepping into the shoes of a corrupt politician, a family man, a cop and a writer, to name but a few of his roles.

To demonstrate his versatility, Pierfrancesco Favino does not stand out in the world of showbusiness solely because of his acting skills. Just two years ago he was on the stage of the Ariston Theatre as co-presenter of the Sanremo Festival and, in his last film,“Padrenostro” he took on the role of producer.

A master of style on the red carpet

When attending the most exclusive international film events, Favino also stands out on the red carpet. Any occasion is the right occasion for him to sport a total colour block look, interspersed with dark tones such as black and navy. Jackets are a staple, even in his most casual looks, but never lack a touch of originality. It was no mistake that the mixed separates he wore to the Cannes Film Festival in 2019 included a daring antique rose jacket, adding a playful touch to his ensemble. Last but not least, his choice of footwear – the essential finishing touch for all red carpet events – is usually classic, such as black or dark lace-up brogues or oxfords.

Passion as a guiding light

What we love about Pierfrancesco Favino is not only his eclecticism but also his evident passion and desire to excel at his job. It is this attitude that is synonymous with Baldinini. At the core of every successful project, you need persistence, commitment and, above all, the desire to transmit a strong, clear message. There are those who convey this message through cinematography and those who convey this message through designing a fashion collection. At Baldinini, we love to communicate ideas and emotions through everyday items, such as a simple pair of shoes.

Provocative, transgressive, controversial: his photography style has been described with a multitude of adjectives over the course […] 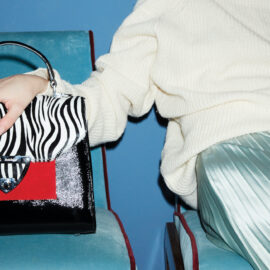